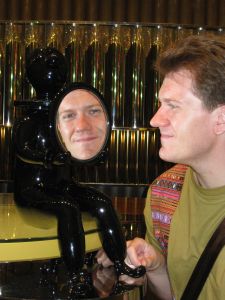 I was born on 24 June 1978 in Rotterdam, where I have spent the first part of my life until finishing high school.

Then I started a mathematics education at the University of Leiden, with as subsidiary subjects topics from computer science. For my M.Sc. final project I have studied the Sound Separation problem, and the resulting thesis and examples can be found elsewhere on this page.

The University of Leiden gave me ample opportunity to study abroad. From September 2002 to January 2003 I have studied in Bath, England, and in the summer of 2005, I have participated in the International Summer School of Shandong University, China.

The trip to England was the first time for me to stay abroad for a longer period of time. It was a good opportunity, and changed me into an international person. Consequently after my studies I moved abroad, to Germany this time. After having worked there for five years, I once again changed countries and moved to China. Four and a half years later, I finally returned to my home city and have lived there ever since.

Computer programming has had my interest for a very long time. At age nine, I started programming in BASIC, but soon other programming languages and technologies followed. I still grow nostalgic when hearing about technologies from the good old days, such as CP/M, which was the operation system of the Exidy Sorcerer and Epson PX-8 computers. But of course I followed suit with technology over the years, grew and learnt many new technologies, with an extra boost after programming became my profession. You can find some of my earlier projects in the software section of this website.

Besides programming, I like playing on my synthesizer and listening to music (both rock and classical), reading (mainly literature written in English and German), photography, cycling, ice skating, cooking, woodworking and travelling.

This was a very brief summery of me. If you have something that might interest me, drop me an e-mail. It is always nice to learn from and about others too!